Every once in a while Movies To Watch Tonight gets to review a different type of movie. Ted, written and directed by Family Guy creator Seth MacFarlane is one of those movies. Seth MacFarlane is famous for his creation of Family Guy. Ted goes way beyond Family Guy in a very irreverent live action / CG-animated movie starring a Teddy Bear who obviously is named Ted played by MacFarlane. Ted’s sidekick and best friend is played by Mark Wahlberg. Before reading further if you are looking for a Movies To Watch Tonight rating, it gets a 3.5 out of 5 stars. One of 2012’s best adult comedies. Raunchy and certainly not for everyone, there are some scenes that go way beyond what some viewers may appreciate, but for the remainder of viewers, Movies To Watch Tonight gives two thumbs up Ted.

Spoiler alert below so you may want to stop here if you are interested in seeing Ted.

A young boy who has no friends, makes a wish at Christmas that his teddy bear might come to life and become his best friend. From the moment the Teddy Bear comes to life, there are constant jokes and so many funny lines that viewers may have to watch the movie more than once to get them all. Seth MacFarlane has done a terrific job although as always he goes way overboard.

One of Movies To Watch Tonight’s favorite actors, Mark Wahlberg stars as Ted’s best friend. He’s the straight man to Ted’s jokes. MacFarlane’s sense of sarcasm comes through loud and clear in the movie Ted. 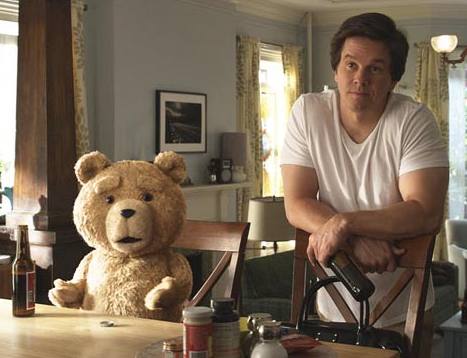 Mark Wahlberg is excellent as the straight man to MacFarlane playing Ted in the movie Ted.

There are too many to mention but smoking dope, hookers, his job at the grocers, hotel room fight with Wahlberg and his entry into the kidnappers home all come immediately to mind. 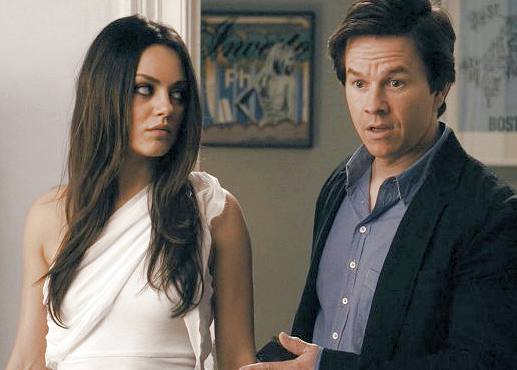 Mila Kunis does a terrific job as Mark Wahlberg's girl friend. Exactly how Wahlberg ended up with gorgeous Mila,when his entire life is basically having Ted as his best friend is never explained, but it doesn't matter.

What Movies To Watch Tonight Didn’t Like About Ted

If you are a Family Guy fan it takes about 20 minutes for you to get past MacFarlane’s voice as he plays Ted. We at Movies To Watch Tonight are so used to his Family Guy character of Peter that it takes a while to not see Peter every time MacFarlane speaks as Ted the teddy bear.

MacFarlane’s scripts is filled with social satire and while quite energetic the movie Ted is a bit too long at 1 hours and 55 minutes. 90 minutes would have been better. The movie would have been tighter and flowed better but overall there isn’t much we at Movies To Watch Tonight didn’t enjoy or like about the movie Ted. 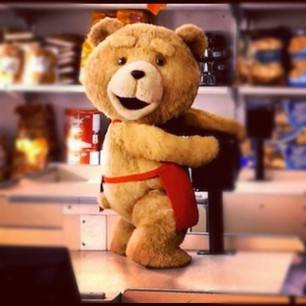 MacFarlane is his usual irreverent self when playing Ted whether it's at the grocers making more than a pass at a female clerk or smoking dope with Wahlberg.

The overall rating is 3.5 stars. It is one of the best adult comedies to come to the movie screen in a long time. MacFarlane has brought his sense of humor to the big screen in fine style. The movie Ted is unique is just about every detail. Definitely restricted and not a children’s movie. If you are easily insulted by foul language, nudity, drug scenes, etc., then the movie Ted is not for you.