At Movies To Watch Tonight we come across a wide variety of mediocre big budget movies and Jack The Giant Slayer is one of them. The 200 million dollars adventure story is interesting enough but whether it is worth the 3D upcharge is definitely questionable and with only average acting one has to wonder why Warner Brothers decided to aim for a PG-13 rating. When we here at Movies To Watch Tonight went to review Jack The Giant Slayer we came away with a feeling that this felt more like a made for TV film, an afternoon type flick. Before we get into the review let’s review the Plot.

Jack The Giant Slayer is simple enough. A young man named Jack (Nicholas Hoult) comes in contact with some magic beans and inadvertently grows a giant beanstalk that reaches into the clouds where a race of giants live. The giants had been to earth centuries before and now they have a chance to return. That’s the basic plot and we at movies to watch tonight don’t like to overdo giving out the plot. But there’s romance, fighting, action, adventure and reasonable acting. We say reasonable because it feels like something is missing from this movie. Maybe it’s because the fairy tale was very simple and meant to remain that way, while instead Hollywood decided that this could be a money-making venture. 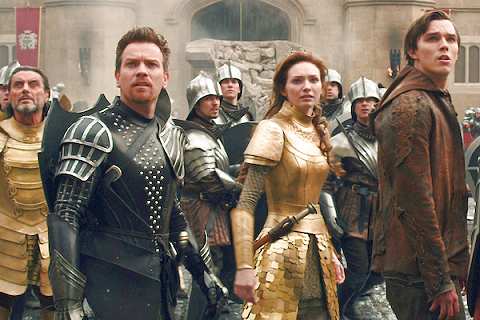 Four of the principal characters from left to right are Ian McShane, Ewan McGregor, Eleanor Tomlinson and Nicholas Hoult

Hoult was a Movies To Watch Tonight favorite in the movie About A Boy and from the comedy Warm Bodies but in Jack The Giant Slayer he seems at times a bit out of sorts. His co-star played by Eleanor Tomlinson does a better job holding her own as Isabelle the King’s daughter. Tomlinson though had more acting experience from such movies as The Illusionist, The Village and Alice In Wonderland.

Ewan McGregor is a long time favorite of Movies To Watch Tonight and his performance is fine but not outstanding. The same can be said of Ian McShane as the King.

Two other stars of the film are the well-known. Bill Nighy does an excellent job as the leader of the Giants. He shows in this role that his versatility still knows no bounds.

Stanley Tucci is also quite good as Roderick and without giving anything away, Tucci plays his role well. 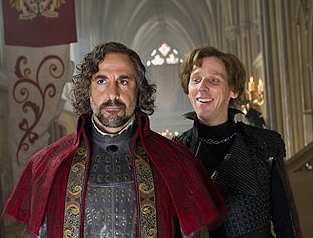 Stanley Tucci another favorite of Movies To Watch Tonight

What Movies to Watch Tonight Liked About Jack The Giant Slayer

The movie itself is well choreographed and visually quite appealing. They did a wonderful job of giving the movie a fairy tale type atmosphere. Jack The Giant Slayer is reasonably entertaining but not geared to adults. The giant in particular are well done as is the bean stalk.

We at Movies To Watch Tonight found numerous things we didn’t like. The acting is mediocre and the movie is definitely not geared to many adults. There was something lacking throughout the movie. It was hard to judge what was missing but there was definitely something about the film that made it easy to go out and get popcorn or drink refills during the film. There is no need to see it in 3D. Many of the stars turn in reasonable performances but it’s one of those film that once you have finished watch Jack The Giant Slayer, you readily forget about it. It certainly does not feel like a 200 million dollar fantasy film.

This is a movie or children perhaps 9 years of age and up. Definitely anyone under 7 we here at Movies To Watch Tonight believe will be disappointed and perhaps a bit scared in places. The fairy tale concept needed to be re-worked somehow before Jack The Giant Slayer was released but for the younger audience we believe it was aimed at we think it meets the criteria of being entertaining enough to keep their attention.

For adults looking for among all the entertaining movies to watch tonight, select something else because this movie is just not adult oriented enough to keep our attention and certainly not entertaining enough to make it worth 114 minutes of our time.

The Cast of Jack The Giant Slayer

Movies To Watch Tonight Statistics Of Jack The Giant Slayer

Jack The Giant Slayer cost 200 milli0n dollars to produce and on the opening weekend made 27 million dollars. The film was given a PG-13 rating which meant that the main audience the film is geared towards cannot watch it. A big mistake on the part of Warner Brothers who will take years to recoup the money spent making Jack The Giant Slayer.

Overall Jack the Giant Slayer feels like an afternoon matinee rather than a 200 million dollar blockbuster. Too many movies are being released with big budget special effects and not enough concentration on true acting. Ewan McGregor for example is a terrific actor who is highly talented but in movies like Jack The Giant Slayer finds his talent wasted.

Our Movies To Watch Tonight rating is 3 out of 5 stars.