Immortals is one of those excellent B movies that just has to be watched to be believed. Here at Movies To Watch Tonight we just love B movies that have big budgets, big names, and yet they still refuse to understand just how bad they truly are. And while we do like watching bad movies at movies to watch tonight, we’re still critical of them.

I cannot imagine many women enjoying this film, but I actually can’t image a lot of men enjoying it either. But Mickey Rourke makes this film watchable and without doubt he is the only reason to watch this movie. The star is supposed to be Henry Cavill, but despite being the central character of the film, Rourke steals the show. John Hurt does a decent job as Zeus pretending to be human. I am not sure why Freida Pinto is in the film at all, but she is attractive and drops her clothes for a couple of scenes so that must have been her extremely important role.

The only other character worthy of mention is Luke Evans who plays Zeus as Zeus while John Hurt is Zeus pretending to be human. Sounds confusing doesn’t it. Don’t worry it doesn’t matter at all.

Yes there is a plot, which is a surprise to us at movies to watch tonight. Rourke plays King Hyperion who has a grudge against the gods and is intent on letting lose the Immortals to destroy the gods and in turn all humanity. Henry Cavill plays Theseus who was chosen by Zeus to lead the battle against King Hyperion. Zeus is played by John Hurt as well as Luke Evans. Why Zeus just doesn’t just destroy King Hyperion himself is hard to know. Anyway that’s the complicated plot.

There actually are some notable moments. Hyperion setting fire to a priest and advising him that he will be shown the light is well acted. Pinto losing her clothes is definitely notable. Rourke with his dogs. Rourke with his armor and weird mask. Rourke’s lines. Well basically everything Rourke. 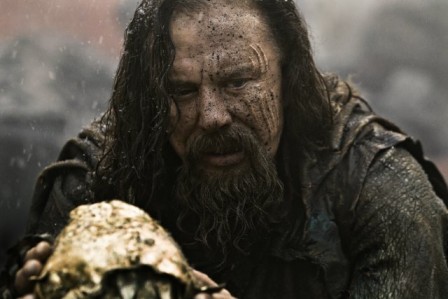 Rourke makes Immortals a watchable film, so the scenes that he's not in are particularly dreadful.

Movies To Watch Tonight Not So Notable Moments

Most scenes where Rourke is not in them. Almost the entire movie. And the gods fighting the Immortals is not as impressive as you would think.

Is Immortals Worthy Of A Movies To Watch Tonight Approval Rating?

Almost. For those who like a good B movie with some action, poor acting, unbelievably corny lines and Rourke doing his best to take his role seriously, then this might be your movies to watch tonight pick. For the rest of us there are better choices, hopefully still with Mickey Rourke.