There has a lot of hype over the movie Gravity so we here at Movies To Watch Tonight thought we had better put in our review. Overall the acting is superb although one of our favorite actors here at Movies To Watch Tonight, George Clooney, we don’t think is in the movie long enough. There are some interesting themes which we think a lot of people may not get and we think there is a certain pro-life message in the film. We do believe the hype is a bit overdone.

Let’s get right down to it. Three people went to see Gravity from Movies To Watch Tonight. Two enjoyed it and one didn’t. One person found Gravity entertaining (the woman of our little group) and one man found it reasonably boring. The other man in our trio felt Gravity wasn’t too bad but felt it could have been shortened and really found the constant whining of Sandra Bullock somewhat annoying. All three felt the images were spectacular and the effects not bad at all. It was one of the tougher reviews from Movies To Watch Tonight staff.

Gravity – The Movie – 3D Effects On The Big Screen & Cinematography

In Space Things Are Slow

In space not only can no one hear you scream, but things are slow which is odd because actually most things travel incredibly fast in outer space. However in parts Gravity dragged. There are though enough action scenes to make it worth watching but this is not a science fiction action film for those who are looking for a lot of action. The guys in our Movies To Watch Tonight group were disappointed but still felt there were some decent action scenes.

There is not a lot of action in the movie Gravity.

Movies To Watch Tonight Review Of The Plot of Gravity

The biggest downfall of Gravity we at Movies To Watch Tonight felt was the plot. Without giving much away, all three of our staff found the plot simplistic and knew the ending right at the beginning. So basically within 12 minutes the entire film was already known by our movie goers.

The Stars of Gravity 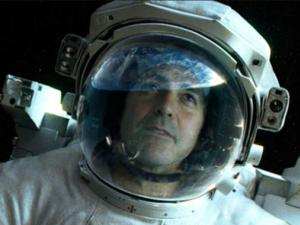 George Clooney is a favorite of Movies To Watch Tonight and he is not in Gravity long enough.

Sandra Bullock did a fine job and as always turned in an excellent role but again all 3 of our staff felt there was a bit too much overreaction on her part particularly if she was supposedly trained to be sent into outer space. Her performance was not outstanding but this was probably more because of the script of Gravity rather than her ability as an actress. Bullock is right up with Clooney as far as we at Movies To Watch Tonight are concerned.

In Gravity Sandra Bullock turned in a fine performance but not outstanding.

We’ve seen many better space films but still Gravity is worth watching if you have nothing better to do. It is far from the worse space film made. It is not too time consuming at 91 minutes and in our opinion even one minute more would have been too long. The space scenes are worthwhile especially on the big screen, but the plot of Gravity could suffice on a TV or handheld. Overall Movies to Watch Tonight gave it 4 stars but it was a tough sell to the guys in our group to convince them it deserved 4 stars. The men in the group want to advise readers, if you are looking for lots of action, check out something else, but if you like drama-action films with a fairly obvious pro-life message than this film is for you.

The Gravity Cast: (worth mentioning)